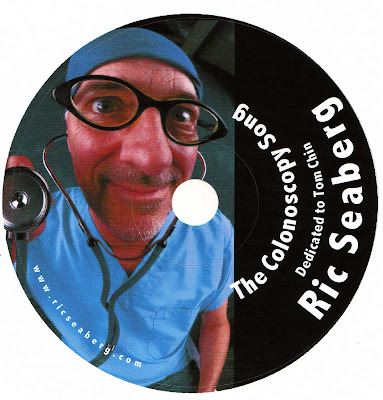 Let's just say I'm in the last half of my fifties. And, since I'm mostly normal, I get to experience, as I go forth into the second half of my life, certain aging related joys, like the occasional back going out, various aches and pains, a tooth implant here and there, other stuff. You don' wanna see my toenails. But I'm super wise.

Our family doc, Brian Trafficante, is a great doc, a great guy, laughs easily, and characteristcally, I mean as a doc, harps on about weight, cholesterol, and oh yeah, Ric, you need to schedule a colonoscopy.

Recently, I finally got around to making an appointment for that over 50 test, and did the prep, the day before, liquids only, etc., got the test, and the findings were very good, so, though oldish, my butt's really healthy.

Marie drove me to and from the test, since a person is sorta out of it after a colonoscopy, given the dose of morphine they give you to keep you quiet. Some people fall asleep, Marie does, but I was awake the whole time.

But later, at home, in my cozy chair, trying to focus on the TV, I was in a bit of a daze.

I could barely hear Marie talking to her girlfriend Joyce on the phone, explaining to her that, since I was so out of it, we might have to cancel our plans to attend a lecture together that evening. Joyce relayed the situation to her husband, my friend Tom, as Marie listened in. At that moment, Tom, who loves to rattle my cage, whether or not I am in a morphine induced stupor, spewed, " Oh! I suppose now there's gonna be A SONG about a colonoscopy!!"

Later, after I came to, Marie told me about that chump Tom's smartass comment, about how, since I tend to write an OCCASIONAL quirky song, that, having just had a colonoscopy, I might be moved to write a song about it. That probably, after lying there, all doped up, while some stranger probed my colon wth a scope, I'd likely go all poetic. Pshaw, Tom. Get a grip. Never gonna happen.

This is likely the most lushly produced song about colonoscopy ever.

I heard you on the daily Dalecast, which is the go-to podcast for songs about invasive medical procedures.

I've also mentioned you in my Podcast Roundup!

I've just had my third in two years today and the song makes it a little more bearable. Thanks.