Live Coverage of Nothing 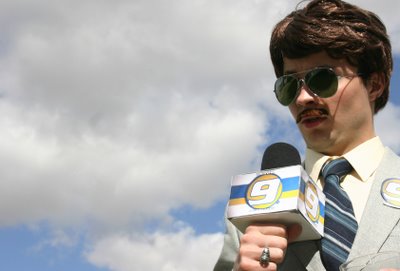 A nasty tragedy occured last week, here in greater Portland, when a Hawker Hunter, a vintage jet flown by veteran pilot Robert Guilford, crashed into a densely populated area near the Hillsboro airport, where the show takes place every year. The large explosion and ensuing fire destroyed two homes and part of a third, and unfortunately cost the pilot his life. I do not intend to make light of this horrific event. Luckily, no one on the ground was injured, and the fire was extinguished quickly.

Portland news coverage began in earnest immediately. Perhaps you know how much I love and trust local news reporting, which I ranted on about in a previous tract titled “Worst Case Scenario News”. I know, they’re just people with a job to do like the rest of us, but somehow, news reporters exhibit a kind of macabre enthusiasm when they are on the trail of really bad news, which can be, methinks, a tad self-serving, and sometimes, borders on the despicable.

Boy howdy, when that little jet went down, and sent Robert Guilford to his death, every news chopper and news van and news person in these parts was off to Hillsboro like a shot. Within minutes, every local channel was reporting live from as close as they could get to the scene, which was not very close, interviewing neighbors, firefighters, airport officials, and passersby. Helicopters   hovered above the neighborhood, as streams of water from firehoses filled the air.

As news trickled in, about the air show, the crashed jet, the fire, and the pilot, our local news teams were all over it. But eventually, within several hours, the news was basically, well, over. The fire was out. We knew all about the dead guy. The two destroyed houses were a black and wet mess. Conjecture about whether or not The Portland Air Show would ever play again at the Hillsboro Airport had been exhausted. It was at that point that the reporting took a bit of a turn.

Maybe they coulda just decided that enough was enough, and gone on to other news, but NOOOOOOOOOOOOOOOO, as John Belushi once moaned, they thought they had us all in the palms of their hands, that we were glued to the TV for any little additional crumb of info about the crash we might get. So what if they had begun to interview people about the crash who lived in the neighborhood, several blocks away, and were not home at the time of the crash, and did not see it, or hear it, and who, basically, were not in any way affected by the crash. So what if the cameras were panning in again and again to the same charred and steaming rubble, as ultra coiffed news gals offered up questions like, “How do you think this awful crash will impact the neighborhood in the immediate future?”, and “Do you think the future of The Portland Air Show hangs in the balance after such a terrible tragedy?”, that sort of thing, for like, at least two hours longer than necessary. And when breaking for the imminent commercial, one young male reporter, after having basically nothing to say, breathlessly required of his surely rapt audience “don’t touch that dial!”

It’s kind of funny, really, watching news folks squirm and stutter and scramble for more news in a story that has so obviously burned out.

It’s at times like this that my wife Marie, who is a bonafide headlines hound, and I, have eye contact, and with a wee bit of disdain in her voice, and a lot of sarcasm, she will make her feelings known about that which she believes is sub-par reporting. Sometimes she just lets out a nice big ARGGGHHHHH! , maybe a hearty laugh. This time, she looked absolutely disgusted as she spoke. “Man, we're watchin' Live Coverage of Nothing”, I think were her exact words, and, as I am sometimes driven to do, it is her words which I have stolen, to well, beef up the news.