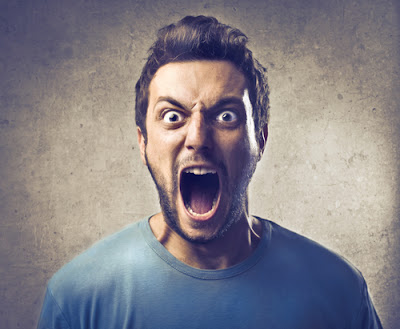 Anger. What an interesting emotion. And I think, because of its power, a sometimes overused emotion. Flying off the handle, if you will, can sometimes get you what you want. Like say, when you're a kid, and you lose your baseball mitt, and you rail on to your folks about how all the other kids have mitts, and you need one RIGHT NOW for the game today, and you're 12 but you still hit the drywall so hard you punch a hole in the kitchen, by the Osterizer, your Mom might just give in and take you to Caplan's and buy you a mitt.
And maybe, over time, some folks begin to rely on anger to drive home their talking points, brow exceedingly furled, voice raised above all others, that kind if thing. It's pretty easy to to tell when someone is doing that. It's kind of embarrassing. I mean for an adult to act like that.
But I'm not saying anger isn't a necessary emotion. Sometimes a person has to feel anger rise up in them to make necessary changes in their life, like say, to help a person fire a tyrannical employee, or get out of an abusive relationship. And of course, some folks may be caught in a loop of anger, if they have been abused in their lives, especially as children.
The way I see it though, is that any of those folks, young, older, abused or not, deserve compassion. Because for me anyway, it would fairly suck to be angry all the time, like a few peeps I've known. Like, when an angry person wakes up to a beautiful sunrise, they're already mad about something. And the motherfucking coffee is too fucking strong.
I'm just throwing out a few thoughts here. Because I'm certainly not qualified to lead a discussion about the ever so complex emotion of anger. And how people use anger. And the effects of anger. And who was deeply and inconveniently angry in history, like say Hitler or Mussolini. I guess for the most part my little small brained point is that anger is often misused, there's too much anger in the world, and people need to relate to each other more kindly, generously, and lovingly. And so, I'm just going to go ahead and say, God bless the angry. They probably suffer more than most. And those around them do too. The world is the most amazing and beautiful place. And we are so lucky to be alive on the earth. So, maybe chill a little bit. Have a yogurt.

So I wrote and recorded a song about it, God Bless The Angry, click here. That's Tim Ellis, as usual, cranking out those guitar parts. Fucker's so good, it pisses me off.