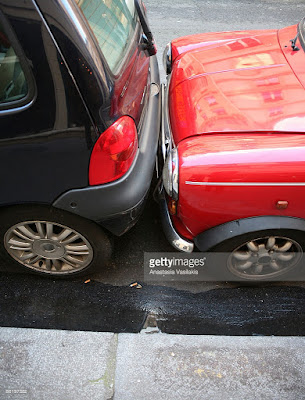 I have lived in the “Famous Hawthorne District”, in Portland, Oregon, as described by Sunset Magazine or some other yuppie publication, for the past 14 years. The population in this area is diverse, a sort of political, ethnic and sexual preference melting pot. It’s popular, the food is fabulous, the shops are edgy. I love it. But I do tend to shop early, before the pot boils over with pedestrians.

Before Marie and I met, I had purchased an old, small Victorian farmhouse, probably one of the first homes in the Hawthorne area, built when it was still mostly farm land. I could barely imagine, but sometimes, as I sat on my porch in white wicker, Starbucks in hand, (Starbucks, one block from home, yikes!), I would imagine the acreage before me as corn, or zucchini.

The parking pressure in the Hawthorne area is tremendous, particularly if you reside only a block or so away from the commercial district, which was the case for me in that house. I had no off-street parking , no driveway, or garage. Many times, when I would get home from work, or a night of hard drinkin’, (just kiddin’), I would be forced to park a block or two from home.

Since I drive a van, and have for many years , it was sometimes challenging to find a good parallel parking space. So I would attempt to find a spot that would accomodate my van, and still allow for others to move in and out of the spaces in front and back of me.

One Starbuck’s Sunday morning, after parking the previous evening directly in front of my house, I went out to take the van on errands. As I approached, I could see that there was a piece of paper, possibly a note, wipered to my windshield.

It was a note.....and man, it was some flamer. Apparently, my parking job had, for all intents and purposes, pinned this guy’s (or gal’s) car in his spot, and he was one unhappy parker. I may have saved that thing somewhere, and I hope I run into it someday. Suffice it to say, the note was fully graced with a plethora of steamin’ four letter words, accusations and death penalties. If I am not mistaken, it referred to several methods of torture, and included the words....”hanging by the balls”. And in closing, the author directed one last shaming my way, by calling me........”a car-boxing shithead”.

All in all, I got the point. And ever since being presented with that glorious note, I have been diligent in making every effort to give fellow parkers plenty of breathin’ room.