Here are The Real Brains behind The Morning Reign, Craig (Cac) Chastain, and Doug (The Shadow) Heatherington, shown here at yesterday’s rehearsal for our impending October 20th performance. Shad and Cac are both ultra quick studies, having been musically inclined since both their mothers admonished them at age 1 1/2 to quit pounding out a back beat on their high chairs. Oh and perhaps it should be noted that both these cats graduated from Willamette University, where we all met in 1966. I didn’t last at Willamette, since, well, as soon as Shad graduated (he’s a year younger than Cac), we hit the road to play dates from Aspen to LA, and golly, Ms. Udris’ 3rd year Russian class was just not on the agenda for me. I mean since I was the complete rock star wannabe. My higher education over the next few years included smoking copious amounts of old school weed and riding in the back of a chassis cab flat bed truck with a 12 foot long box on it. Ah the pleasures of the road. 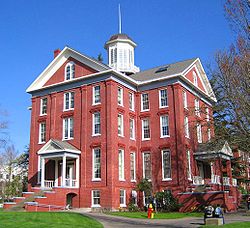 When we first got together, we practiced our three chord songs on the Willamette campus, wherever anyone would have us, in the basement of Delta Tau Delta, or the ivy covered and amazing Waller Hall at Willamette, (shown here, built in 1864) kickin' out garagey if not passionate versions of Gloria and Sweets For My Sweet, Mustang Sally, Louie Louie, (we in the 1966 Morning Reign just called it “Louis”), and other C-F-G rockin’ ditties. At one point, when we had overstayed our amplified welcome at yet another room, we landed in the daylight basement of Cac’s very kind and yet perhaps deluded accounting professor. That lengthy and ball bustin’ scream I used to lay down right before the guitar solo in Foxy Lady was, I’m sure, a favorite throughout that little south Salem bedroom community.

So now, after 40 years, we are again practicing to attempt an 8 song set at The Salem Armory on October 20, where an hour of Chuck Stenberg’s engaging film about early NW rock will be shown, right before we take the stage. We are having a blast, and the tunes are starting to come together, owing, partly, to those really smart and studious guys above. More cowbell!!

So wish I could be in Salem on Oct 20th to witness this historic reunion but alas I will be in Helena visiting our grandson. Please give big, big hugs to all the guys and I know you'll knock em dead!

I know the boys would have loved to see you Donna. Maybe you'll get a chance to see all of them during the 2013 world tour called..."The Morning Reign-The World's Best Rock Band that Never Made It"

hey ric...ever wonder why you never made...
this is the real beau from
the mourning reign

Hi Beau! Nice to meet you. Hey here is an older blog post where I talk about the Reigns: http://ricseaberg.blogspot.com/2005_05_19_archive.html