I have a client, whom I have done a good measure of handymanning for, who has a bomb shelter in her basement, built in the 1950s, before she purchased the house. It has a big metal door, and once, we opened the thing, just so she could show me the inside. Super small. I didn’t see any air holes either. Probably useless. Probably a good lesson in how crazy a good bit of fear can make a person. Kind of like a concrete tomb.

In practice, I guess you hear on the radio or black and white tv that the The Commies are floating a nuclear bomb up the Willamette River, and it’s gonna blow any second. So you grab your spouse and your five year old twins named Lana and The Beav and a couple boxes of corn flakes and roll into this dank cave so that after the blast which of course you stylishly survive, you roll out and mow the lawn, maybe have a cocktail mixed in a spiffy Art Nouveau hand painted glass pitcher. “Whew”, Dad may have been heard to chortle, circa 1959. “That was a heckuva nuclear blast. Hear tell that mushroom was sizable!”

I attended Atkinson Grade School in Portland, Oregon from 1954-1962. These were the years of The Cold War, with that fist pumpin’ Nikita Kruschev and Russia, and the real possibility of some type of actual war. At Atkinson, and in schools all over the USA, students and teachers practiced what was called a “bomb drill”, “air raid drill”, or “duck and cover drill”. When a certain sound,  generated from the school office,  would permeate the school (I think it was a loud buzzer), all kids were required to line up, march into the school hallways, and hit the floor against the hallway wall, and then “duck and cover”, kind of roll yourself into a ball and put your arms and hands over your head. You know, so when the nuclear blast goes off and burns all your skin off, your head will be protected by your arms. But here’s the weird part. At Atkinson, during the drill, and this happened many times, they played some kind of record over the school intercom, or in some teachers room, of what I would describe as the sounds of a gun fight between airplanes, like what went on in The World Wars, NNNNNYOWWWWWWW, (explosion, ack ack ack ack ack ack), NNNNNNNNYOWWWWWWWWW, etc, while we 8 year olds were ducking and covering. If you went to Atkinson during this time, please comment here to validate my memory of this. Even as a young child, I can remember thinking, this is kinda weird. I mean, this is some scary shit, what’s with the sound effects. I bet it was emanating from the room of one Mr. Ball, he was kind of a nut. 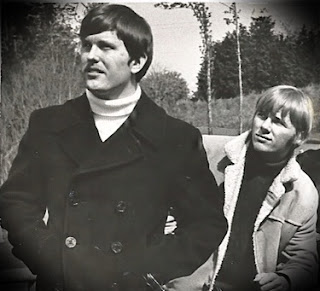 Here’s a photo of my buddy and Morning Reign member Craig “Cac” Chastain, who is a couple years older than me, in about 1968.  Cac was a sophomore in high school in Pasadena when I was an eighth  grader in Portland, in 1962, during the Cuban Missile Crisis. Cac remarked to me many years ago that this period of our history scared the livin’ daylights out of him, what with all the talk of bombs and the dangers of communism. He once said “I was sure the Commies were gonna be comin’ up the Sacramento River in gun boats”, in a kidding tone, but really, those times were uncertain, and I think all of us kids during that time deserved to be a little nervous.

Well wha’d’ya know. The Commies did not detonate a nuclear bomb in Duluth, or Pasadena, or Portland. But then the Viet Nam War was heating up, and we boys in the Reign were pretty sure we’d be going to Nam. Several of us were given deferments for one reason or another, but our first keyboardist Bob Baker did join the service, and we all thank you so much Robert for serving our nation and risking your life.

And I suppose it’s no shock that with my background, and especially The Viet Nam War, some of the lyrics that were coming out of me back in The Days of The Reign were full of images of suffering and you know, being all critical of war, gettin’ my peace and love on.

Here’s a song titled “Wish I”, which I wrote with Larry Sieber in 1969, whose keyboard figures play a prominent role, and inspired me as I wrote the words. It sort of encapsulates my feelings about what was going on at the time, The War, The Peace Movement, my skepticism, and hopelessness. Which is kinda weird cuz I am down deep a really optimistic person. But that fear, sometimes, it’ll getcha’.