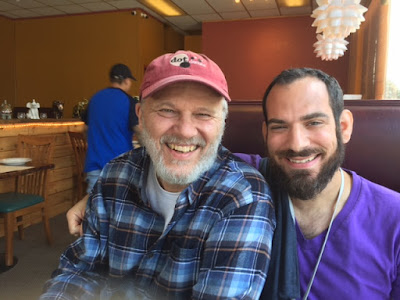 This weekend my wife Marie is attending the XOXO Festival and Conference,
described online as “an experimental festival celebrating independently produced art and technology”. On the second day of the conference, she ran into my friend Jonathan Mann, the famous “song a day man”, who was a presenter at the conference last year, which you can see online. That’s Jon up there with me in a booth at the Thai place where we met for lunch today. Jon and I first met online, when I discovered him and his amazing songs. But today was actually the first time we have ever met in person. To date, I have recorded about 6 of Jon’s songs. So I guess it’s fair to say we have occasionally collaborated, and I am grateful Jon has allowed me to create my own versions of his songs. My favourite story about Jon is how I came to record our song, “I Don’t Drive.”

Somewhere back there a ways, Jon attended a meditation weekend, and right after that, I could hear in his songs, (he posts one every day!), that he had been impacted by the retreat, owing to some of the lyrics he had composed. One song, “I Don’t Try”, was especially great, I thought, and decided the second I heard it that I wanted to record it. So I did. On the day I recorded it, Marie was home, probably working away on her book, in her office, while I was doing my thing in my little home recording studio, laying down music tracks, arranging and singing the lyrics to “I Don’t Try”. After getting to a good stopping point in the process I decided to go downstairs in our home and make myself something to eat. When I got downstairs, Marie was sitting at the kitchen table, typing on her laptop, and we exchanged “hi honeys”. Then after a moment, she stopped typing and looked at me and said, “so..........you don’t drive.” At first, I was confused. Then I realized, that as she sat hearing my muffled warbling through my studio walls, wafting through the house and into her ears, what she thought she was hearing as I sang “I Don’t Try”, was “I Don’t Drive”! “No, honey”, I finally spoke, “It’s “I Don’t Try”. So we had a little minor chuckle. But then, just because she had heard me incorrectly, and also since I am nuttier that a fruitcake, I went back upstairs, and, still using many of the original words of the song, rewrote the song to include the words she had thought I was singing, that is, “I Don’t Drive”. So basically just because I wanted to respond in some silly way to the fact that she had heard me wrong, I changed the song just for her. Cuz Marie is my pluperfect spousal muse.

I completed the song, and played it for her as I do many times, the two of us sitting in my studio, with headphones on, and I could tell right away she liked what I had done. Then I contacted Jon, and sent him a copy of the song, for his approval. Then I immediately sent a copy to NPR’s CarTalk show, where I have been lucky enough to have some of my songs played. And wha’d’ya know, I just came up with another song about cars, Ok that’s weird. But the following weekend, (wow that happened fast), the awesome folks at CarTalk aired the song, which pleased us all very greatly. I had fun reminiscing with both Marie and Jon and our other lunch guest Noah today about the amazing “I Don’t Drive” musical moment.

It was great to finally meet (and nosh with!) the incredible songwriting genius, Jonathan Mann.

Listen to "I Don't Drive"