"The Morning Reign" rock band, of which I was a member, was founded by five Willamette University students and one Oregon College of Education student in 1966, as I have railed on about on this blog several times. My 2005 entry, “The Morning Reigns”, clears up the universal controversy about the fact that another group of the same name was doing business about the same time in California. Other entries mention experiences we Reign Guys enjoyed during the time we were together, 1966-1972. In sum, 12 young men played in the band over time.

I have really missed all those guys over the years. There is something magical and memorable about that time in my life, not just the attention were were getting, and the music itself, but I think, most importantly, the comraderie we shared was pretty much of a miracle. Just imagine, 6 guys, around 20 years old, and that is young!, in a basement, working so closely together to make a song sound good. “What’s that chord you’re playing right before the bridge Bob?. Is that a B? Would you try a Bsus, that’s gonna sound way better I think”, that kinda stuff.

We all had our place in the band. Craig, aka “Cac” was our leader, he was the oldest, had actually graduated from Willamette, did the official stuff, took the calls and made business decisions, and handled the money. Looking back, and knowing him as I do, I can tell you that Cac was always a great President of The Morning Reign. He was honest, kind, hard working, and, I should add, (and this is truly agreed upon by all who know him), funny as hell. None of us could ever have asked for a better big brother. Craig played rhythm and lead guitar, and sang.

Doug, aka “Shad” our second oldest member, who had also graduated from Willamette, played bass, and did lots of other things for the band, including wardrobe care. Doug was always spearheading the loading of the equipment after the gig while I was off slacking and talking to females. This tended to piss Doug off. Doug played a mean and driving bass, and has a funny streak of his own. I made a wedding cake for Doug once, and also was best man at his wedding. I love that guy.

Gene, aka “Geno”, is rightfully acknowledged as the musical director of The Morning Reign. Gene is unendingly talented, is charming, funny, (we’re all funny), can fake a killer English accent, (well not really but he’ll try it on you if he is 20 and thinks you’ll buy it). Gene and I wrote most of the original tunes we did in The Reign. We wrote alone and together, but almost always contributed something to each other’s songs. Gene plays lead guitar. And if you aren’t sure what to play, he’ll show you, always kindly and with encouragement. Oh wait I forgot to mention that Gene is an incredibly good singer, some a’those fuckers have it all.

Bob Baker, above left, was our first keyboard player, and played with us for several years. Bob can hold his own on the keys, but his biggest strength, besides bein’ so damn cute, is his killer singing voice. Im not sure but I think the guy might have perfect pitch, and we would have him share the high harmony parts with Cac, which those guys consistently nailed. When Bob was called to the military, we struggled until we found another capable player. Bob has lived most of his adult life in small town Eastern Oregon. He looks and acts ridiculously healthy, and he will probably live to be 150.

We had five drummers over The Reign Years, but Howard Holland and Steven Tate were in the band longest. Both Howard and Steve can play with the best of them. And Steve is the best singing drummer I ever heard. Even better than Levon Helm, rest his soul.

And lastly there’s me, I’m the singer, or as Cac used to sarcasically yet lovingly call me prior to the ravages of time, “face man”.

And I cannot fail to mention our good friend and keys magician Larry Sieber, our last keyboard player, who unfortunately passed away in 2010. Larry and I were very close. During The Reign Years, Lare and I were sometimes at odds. But it turned out, as the years went by, and we got real jobs and families, we had more and more in common, particularly being handy with tools, and we both spoke handyman and construction fluently. I miss Larry terribly. Yet another funny Reign guy. And oh man could he talk. I read a poem at Lare’s funeral, and I swear to you it was the hardest thing I have ever done.

Enter Salem, Oregon film maker Chuck Stenberg, who emailed me a couple years ago looking for Reign information, since he was anticipating his making of a documentary about early NW rock. As the months passed, we Reign members were interviewed for his film, and then, Chuck settled on the main topic of a film highlighting the career of our friend Ed Dougherty, who has been operating as a promoter in this area going on 50 years!! Back in the day, we played hundreds of dates for Ed.

An hour of Chuck’s awesome film is going to be shown on October 20th at the gig described in the poster below. And get this.... The Morning Reign, that’s us!, are rehearsing to play a rockin’ 40 minute set. Meeting with the guys a couple days ago and running through our song selections (what we are gonna play is a secret) was so great I can't begin to describe it. Suffice it to say the The Morning Reign are on a tear, and we are going to blow your mind. 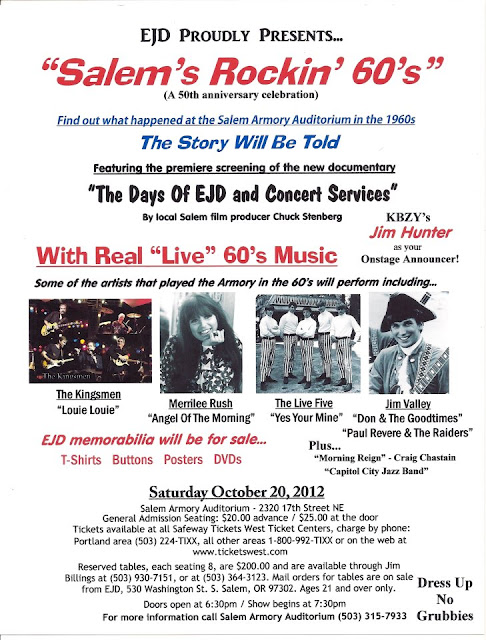