Hamlet and The Dudes 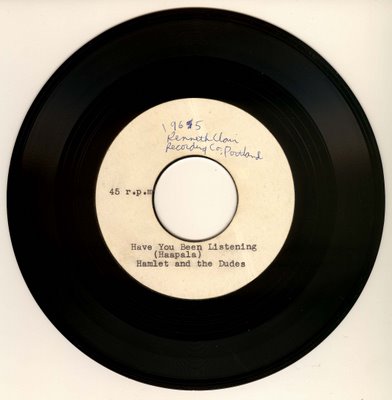 We were 17, in 1965, and we were folk singin’ crazed. We had begun a little guitar strummin’ foursome we had named “The Firebrand Singers”, because, uh, I think it was because I had looked through the dictionary to find a word that suited our iconoclastic and raging hot repertoire, which included “If I Had A Hammer”, Tom Paxton’s “Cant Help But Wonder Where I’m Bound”, a few Chad Mitchell Trio gems, and of course, Dylan’s “The Times They Are A’Changin’, which I sang with great passion, and illumination, just in case any mothers and fathers throughout the land who shouldn’t be criticizin’ what they couldn’t understand were listening. I am happy to report, however, that we never stooped so low as to cover “Little Boxes”, (all made out of ticky-tacky and they’re all just the same). But I admit that when I drove through Daly City, in the 70’s, I finally understood what the song was about.

My friend Dan Haapala and I comprised the nucleus of “The Firebrand Singers” whose members included, over the six months or so we called ourselves a group, Dick Beswick, Jim Knutson, and Ken Holstrom. We didn’t practice much, and we never had a gig, but we were definitely bubbling under in the folk scene, in our minds anyway.

But my buddy Bruce Hofer, who was an electronics nut, and had made his own amplifier, could play the bass, and it wasn’t long before I was drawn into thinking it might be nice for this group to have a little backbeat, and then Dylan went electric, and then “The Firebrand Singers” went electric. I looked at the local music store’s musician bulletin board, and called a few drummers. We found a young guy on the other side of town whose chops on the drums far exceeded our own musicianship, but he was gung ho for a gig, and he was hired. I mean he said he would join the band.

Dan was a piano player, and he had been writing some of his own songs, which I thought were great, so we learned a few, most notably, a piece titled “Have You Been Listening”. After we had learned the song, and played it around, my pal Ted Sorenson, (who had an actual job at Portland’s original cut rate box store, Gov-Mart Ba’zar), offered to pay for us to go into a recording studio to cut the song, along with another I had written titled ”Second Love”.

So we found our way to “Kenneth Clair Recording Studio” in downtown Portland, there in 1965, and laid down our tracks. It was so much fun. Kenneth Clair had a 2-track reel to reel tape recorder, which meant we could play the music, and then sing the song over the music on a separate track, very high tech! Putting on the headphones, and listening back to the music while we sang, with a little reverb effect added, man, I thought we were on our way to stardom. After making the record, we needed a name for the group. Having always had a way with words, I suggested “Hamlet and The Dudes”, with me, of course, bein’ Hamlet.

I have kept a copy of the 1965 version of “Have You Been Listening” and “Second Love” all these years, and my brother in law Curt Deatherage was kind enough to make me a cd from the original 45 rpm acetate, which had nearly disintegrated, lying in the bottom of some keepsake box. Below, you can hear Dan croon his fine song, behind several decades of record scratches and pops.

In 2004, just for the fun of it, I made some changes to the original melody of the song, and cranked out what I call “Have You Been Listening 2004", which I did here at home in my own little studio, where I can call on 32 tracks if I need to, like just about every other cat who records at home these days. Tim Ellis plays the awesome guitar parts. It was a blast rerecording the song, a song remembered by only a handful of former Franklin High teenagers, and giving it new life.

Have You Been Listening 2004
Hi-Fi Download  by Ric Seaberg