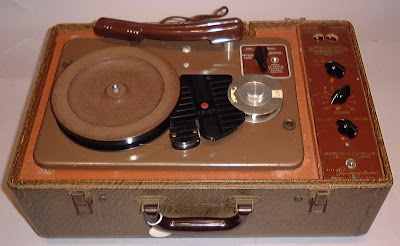 Before there was reel to reel audiotape, and cassette tape, and 8 track audiotape, and CDs, and other forms of digital recording, there was "wire recording". People would buy wire recorders, mostly portable size, (but heavy as hell) like the one shown above, or even consoles, like the one shown below, and then, through through the miracle of modern technology, pull out a little mic, and record, using the machine, while a thin wire, like a really thin picture wire, would spool by. Much like the later tape recording machine, only with wire instead of tape. We had such a machine in our home, console style, almost exactly like the one shown here, when I was very small, and a good supply of these little wire containing boxes, available at Sears and other 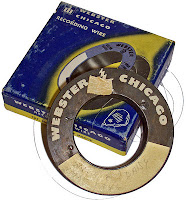 fine electronics stores. My grandparents lived in Chicago, where I was born in June 1948, but my folks had settled in Portland, Oregon. My sisters Elaine and Julie came along later. My folks were tight with my Dad's parents, and they would visit at least once a year, though in those days the trip was more difficult, I mean, even by noisy propeller aircraft. But during the months that my grandmother, Hildur, and my step-grandfather, J. Edward Martin, were in Chicago, one way we all stayed in touch was by, you guessed it, the wire!

We would gather round the wire recording machine, on say, someone's birthday, or a holiday, or when my Dad got a raise, or I had a song to sing, and record onto the wire, which would then be sent off to Chicago, for Hildur and Ed's edification, and pleasure. We would get back a tape now and then, my grandma going on about their latest trip to Europe or the Orient, or the turmoil in The Christian Science Church hierarchy.

When my grandfather Ed passed away in 1978, my grandmother moved to Portland, and I swear, brought every little gadget and morsel of her entire life with her. Like shoe boxes full of those little rain bonnetty things ladies used to get at cosmetic counters and tire stores as schwag. But luckily, one thing she brought that received great approval, by me especially, being an audiophile, was all those wires my folks sent off to her when my sisters and I were little. Bonanza! There is nothing quite like hearing the sound of your own voice, and personality, at say, 5 or 8 years old. I hope I have mellowed some since those days of being a loud mouthed egomaniacal little boy, but really, when I hear myself on those wires, I feel compassion for the child. I like him. I want to help him. I'm glad I AM him. 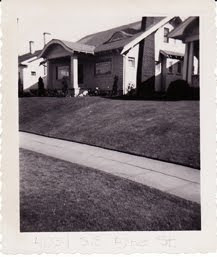 Christmas Day, 1949. Ricky is 18 months old. My folks, Lorraine and Bob, and my Aunt Ruth and Uncle Clair, are gathered on Pine Street in SE Portland where we lived. The house, photographed here in 1949, still stands. The fragrance of strong Swedish egg coffee and fresh Oregon Douglas Fir fills the air. The wire recorder is switched on. "What's that, Ricky?"


So I humbly present to you the original wire recording of Christmas at the Seaberg house, 1949. Click here. And here are are couple more photos of me when I was a kid. I mean to placate my egomaniacal streak. 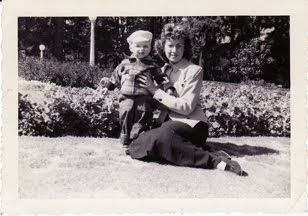 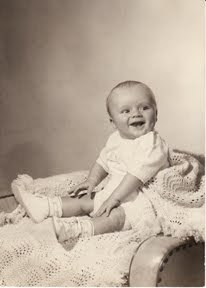