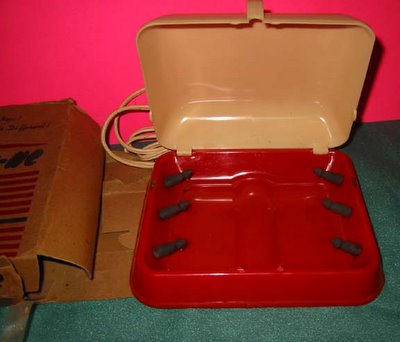 I have spent an unacceptable amount of time in my life, thinking about how I might not be like my Father, Bob Seaberg, who was an odd man, narcissistic, sort of a handful. I did love him, and I miss the “nutbrain” (one of his favored terms of condemnation), but I must say, I don’t miss the embarrassment I would feel when I would see him or hear him treat someone, my mother, my sisters, (or me) with complete and utter insensitivity. “Not gonna be that way when I grow up”, has been on my mind far too often.

Okay well my Dad passed away in 1993, and when a person dies, you never get to see them again, which fairly sucks, and starts a person’s tendency to remember the better things about a person, and forget the bad. These days, I remember my Dad’s once annoying behaviors with humour, and perhaps, a bit more wisdom. But when he was alive, dude could piss me off. Once, at his second wedding, (Mom passed away in 1990), he raised his voice to me at the wedding reception, in front of many guests, such that my fine brother- in-law Tom felt compelled to take me aside and express his concern and support. There I was, brow sweating, after having catered the whole affair myself, and as he greeted his guests in the church activity room, he goes on a rant about how I had not “saved” enough of the nicer food offerings for him to eat. “But Dad”, I might have said, “I left the sandwich board sign I was gonna wear, stating “Hey everyone in the food line, leave the shrimp and the stuffed mushrooms alone ‘til the groom has eaten”, at home by mistake, I am SOOOOOOOO Sorrrrrrry!” But of course I said nothing, as usual, not wanting to escalate the tension, or be just like him.

My Dad was a great gadget aficionado, a tendency of his which I recall with great fondness. He worked as an electrical parts salesman, and running in that world, he was always onto some new gadget, or product, to make our lives easier. The “Speedy Weenie” six prong- three dog-hot dog heater upper, pictured above, arrived home about 1956. Talk about convenience. No longer would my mother have to go to the trouble of heating 3 hot dogs in water. I’ll tell ya, what a great time to be alive. Check this thing out. You thread the hot dogs onto the prongs, and they sit there in a sort of a half moon shape, and then you plug it in. Basically, 110 volts of electricity would shoot through each dog, heating it in the process. A wonder of modernity. Just don’t forget to unplug it. Cuz if your child happens by, and grabs those prongs while it’s still plugged in, they might die. Lemme guess. The Speedy Weenie was eventually pulled from shelves because of the potential danger to the user. Dah! 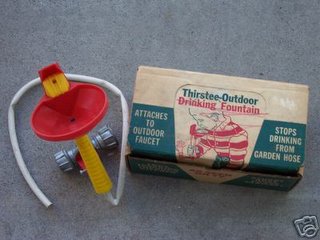 And I will never forget the little red “Thirstee” plastic outdoor drinking fountain, pictured here, that came in the mail one day back then, much to my Father’s glee, and I remember him hooking it up to the hose bib on the side of the house, which unfortunately, was about a foot from the ground, but I did take a few slurps outa the thing, on my knees. “Ahhhh”, I’m sure I said as I wiped the refreshing drink from my lips, “And I didn’t even have to use that unclean and bacteria ridden hose end for a drink!” But alas, at our house, the Thirstee Fountain wouldn’t stay perpendicular to the bib, it was way loose, for some reason, so everytime you might want to use it, you had to hold it in place, and then, I recall that the stream of water was so tiny, that a nine year old boy might be tempted to just go back to the ol’ hose for a drink. 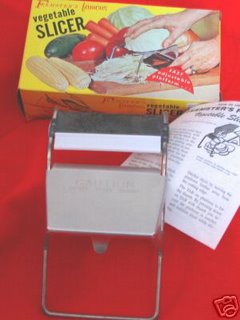 My dear Mom, who was a whiz in the kitchen, had a succession of Feemster Slicers, supplied by Dad, to help her with her kitchen duties. I believe you can still buy these things, a sort of early day chef’s “mandolin” slicer, where one strikes the carrot against the oh so sharp blade, and if you are lucky, keep your thumb tips attached to your body. I once cut myself horribly on one of these things, running some veggie through.

My Dad didn’t live long enough for me to present him with a convenient and money saving “Soap Slivers Compression Apparatus”, which I once spotted in a Miles Kimball catalog, in the stack he kept by his recliner. Talk about a gadget whose time has come! You keep all those little soap pieces, you know, the ones that have gone “face to butt” aproximately 400 times, and when you get enough of them, you put them in this manual compressor thing, sort of a soap vice, and voila, you have created another big and fresh bar of soap! And if you’re lucky, you might end up with a fragrance unknown to nature, such as the newly invented and unusual scent of Irish Spring, added to a sliver of organic Rosemary soap, combined with, among others, the pungent aroma of that “Chocolate Moose” soap bar you found in your Christmas stocking!

So I come by my love of gadgets honestly, a trait I inherited from my Dad, (the only trait!) like my love of power tools, for example, especially the new 18 volt battery ones, they’re awesome. And it is true that, two summers ago, faced with needing a new air conditioner for my office/studio, I did select the one that comes with a remote, such that, as I sit recording, I can flip it on and off from across the room, “On” when not recording, and “Off” when the mics are hot.

And I do have my entire yard irrigation system tweaked, which requires 4-option diverters on each of our four hose bibs, which is initiated by many timers. And the big waterfall which graces our pond, well, it has a remote control too.

My wife Marie is everything to me, beautiful, sexy, smart, kind, generous, funny, a great writer, my best friend, like I said, everything. And she is kind to look the other way, most times, as I bring home, since it’s in my genes, various and sundry gadgets. But when she put down her foot, and said that she would not abide my desire to buy remote contolled venetian blinds, so that we would no longer have to climb on the couch to shut them, honey, that’s just wrong.

My story in annoying detail:


Soundcloud: https://soundcloud.com/ric-seaberg
Posted by Ric Seaberg at 9:25 AM 3 comments: