My friend Tim Ellis slipped this mortal coil yesterday, having valiantly fought that damn cancer in the recent past. Tim was 60. Perhaps some of you heard of the magnificent benefit concert held in Tim’s honor last month, at Portland’s newly remodeled “Revolution Hall”. The venue was packed to the ceiling with friends and fellow musicians. The program was so great, starring Pink Martini, Art Alexakis of Everclear, Steve Hale, Aaron Meyer, Tom Grant, Patrick Lamb, Michele Van Kleef, many others, and even featured the weakening Timmy playing guitar. It was a wonderful tribute for Tim, attended by many of Timmy’s friends and acquaintances he had made over many years as Portland’s best and most sought after guitarist, oh, and all around great guy. He will be so missed by so many. I offer my condolences to Tim’s wife Susan, Tim’s family, and the many, many peeps and musicians Tim had grown close to, like Jim Walker, Jean Pierre Garau, and Aaron Meyer.

In 2001, after I had battled my own health issues, I decided to begin recording again, after many years of putting music on the back burner. I had sold my bakery, had an awesome relationship going with Marie, and all of a sudden, a few new songs started coming through. I had read an article in The Oregonian about Tim and his musical and recording prowess, so I called him and asked if he would consider playing guitar on my songs, which I had recorded at home, but which needed the attention of a quality pro guitar player. So we made a date for Tim to come over and record two songs, “Forever Marie”, which tells the story of offering my hand in marriage and professes my love for my amazing future wife, and another song, "Like Him That Way", which I had written for my also amazing step-son Blaine Deatherage-Newsom, whom I had also fallen in love with. 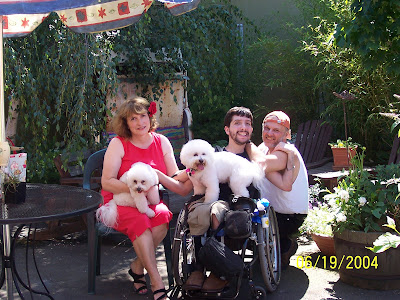 So Tim came over, lugging a couple guitars and his amp, and his effects pedals, and we eventually made it upstairs to my little office studio. But first Tim met Blaine, which I could tell, made a huge impression on Tim. From that day forward, it went like this: when I had prepared songs for Tim to play on, I would call Timmy and make a recording date. Tim would arrive, pet the dogs, we would drag his equipment into the foyer, and then he would make a beeline for Blaine’s room, where they would spiritedly gab and laugh for the first half hour of Tim’s visit. This happened dozens of times. Blaine would anticipate Tim’s arrival like a kid in a candy store. They would talk mostly sports, in some depth, given their mutual love and knowledge of sports. The Dodgers. Tim loved the Dodgers. Well mostly. Tim was consistently respectful, warm and kind to Blaine. Major points.

Tim and I recorded over 200 songs together, mostly written by me. On that first day of recording, I saw in person for the first time the musical genius who would become my dear friend devise and play the most amazing guitar parts on the two songs I mentioned above. I am certain that Tim was moved by our family and especially by Blaine’s attitude and bravery. But I had no idea that this inspiration would translate into such magnificent guitar work.

Here’s how Timmy would work on my songs. First, I would give him a printed lead sheet of the songs chords. Then, with headphones on, we would listen to the song, which contained all the parts, bass, drums, vocals, and make marks on the lead sheet while it played, sometimes I would yell something at him, like “SOLO”, which he would acknowledge with a nod. Then he would tell me what he wanted to do. Like “this song needs an acoustic guitar, let’s track that first”. Or, “I brought the Telly, (Fender Telecaster), let’s try this”, as he tweaked the buttons and knobs of his amp. Maybe he would say, “Hey, play the intro please I wanna be sure I’ve got this echo timed right”. Then he would say, “ok let’s record”. And believe it or not folks, this cat could then play the song, the rhythm part, the lead part, other embellishment, first time through! On the two songs mentioned above, it was one and done for all the parts. On occasion, over the years, I would just shake my head and say, “Tim, you blow my mind, how in the living hell do you do that?”, to which he would always kindly respond, “Ric, your songs inspire me!”

So yeah, amazing musician, absolutely amazing. Entrepreneur. Chatterbox. And Tim and I had other things in common too. We both started businesses, and we both owned commercial property. We were both employers and landlords. We had plenty to talk about! I am so blessed to have even known Tim Ellis, let alone to have a catalog of over 200 songs that he played on. But the thing I am most blessed for, is that Tim was a very fine and loving friend to Blaine, for which I will be forever grateful. Tim was a great friend to me, to Marie, and especially to Blaine. The world needs more people like Tim Ellis.

Here are some of Tim's finest performances on my songs, a couple of which he speaks on: