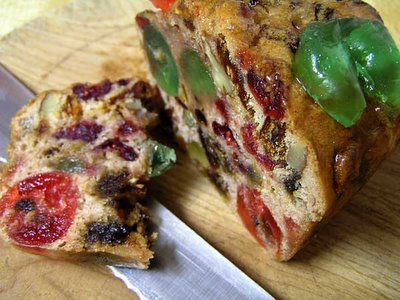 “Oh yeah, well I KNOW all about fruitcake buddy! I’ve worked in Emergency at a hospital, and I’ve SEEN what fruitcake can do to a person!”

Several days later I found myself, shall we say, fully involved in the making of the fruitcake, with hundreds of pounds of those ingredients strewn out onto our 5’ x 12’ maple workbench. Karl and I poured the white colored and rum fragrant batter onto the top of the fruit and nuts, and then, began to gently turn the pile into a spicy, rich fruitcake mixture, using the full length of our arms. It was tiring. Basically, a good fruitcake contains mostly fruit and nuts, and very little batter. We finished, hosed down, and scaled the finished batter into round pans and full sheets, and baked it at a low temperature all day. When it was almost finished, we pulled the pans from the oven, one at a time, and topped all the cakes with fruit and nuts we had held out as topping, after, of course, soaking it all in rum and flavorings, and finally, brushed on a sweet and shiny apricot glaze over all the cakes. The making of that fruitcake, all those years ago, on that day, when I was still in my 20s, the spectacle of it, hooked me on fruitcake. I decided to like it. 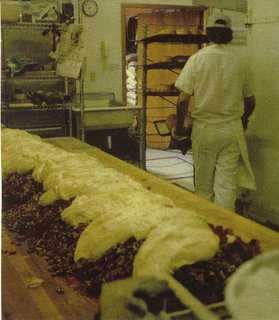 I worked as an apprentice for 3 years, and then opened “Richard’s Bakery” in Tualatin, Oregon. Later, I opened my second bakery, “Favourites Bakery”, in Portland. Every year, while I was in business, my staff and I would crank out hundreds of fruitcakes, at Christmas time. Since it was an all day affair, I would try to make it fun, have other foods for the staff, maybe bring in a chef to make u 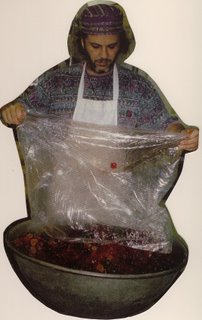 s something, sort of a Special Christmas Party For Baker’s Only.

In about 1985, after ten years in business, I began to tire of the plethora of “fruitcake jokes” out there, you know, how there is really only one fruitcake, that gets regifted around the world, since no one will eat it, how they make great doorstops, all that. Since I had been interested in fruitcake for some time, by then, I had been trying other fruitcakes every chance I got, and I was not surprised that fruitcake jokes were all the rage, given the many really lousy fruitcakes in the world. After thinking about it, and developing my ideas about it, I wrote a tract titled “In Defense of Fruitcake”, and placed copies of it on my counter for people to take. The basic idea is, if you make it right, use great ingredients, it’s gonna be good. If you make it cheaply, as is done so many times by wholesalers, and well, grannies, trying to save a buck, its gonna be shit. Later, owing to my attitude about fruitcake, and just for fun, I had some stickers made, depicting a big black circle, and slash, 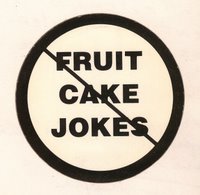 forming the newly invented International Sign for “No Fruitcake Jokes.”

Over the years, “In Defense Of Fruitcake” got around. I had sent a copy to “The Retail Bakers of America”, and through them, others found the article. One year, I think it was 1987, I got several small checks in the mail from newspapers around the country, who had reprinted it.

But the coup d’etat was in 1989, when writer Maria La Ganga, of the LA Times, did her research for an article she was doing about fruitcake, and used me, and my tract, as her springboard. The AP came out to my shop and took photos, and on December 13, 1989, the article came out, and was reprinted that year in many papers around the country. In the article, she refers to me as “the father of the fruitcake revolution”. You can imagine what a kick I get out of that. My usual hundreds of pounds of sales went well over a thousand that year. The article is still available to view online at The LA Times archives.

I didn’t get on Letterman, which woulda been a riot, me an’ Dave hurlin’ crappy fruitcakes offa the NBC roof, to see what kind of damage we might generate, but I did get phone calls from all over the country, from DJs, whose attitudes ranged from interested and nice to downright stupid. I would take the calls, negotiate my way through their questioning, and dumb jokes, all the while supporting my position on fruitcake.

When I sold “Favourites Bakery” in 1995, the name went with the sale, so I had to think of another name for my corporation. After very little thought, and since I can be such an impulsive sucka, I wrote “No Fruitcake Jokes, Inc.”, on the application to change the name of the corporation. I kept that name for a number of years, and it did shock and unsettle a few, when writing checks with the corporation name on them, or using business credit cards. Once, at Costco, when I used my “No Fruitcake Jokes, Inc.”, American Express Card, a management person was called over, and he quizzed me. “Sir, uh, what type of business was it that you have?”


Buy a "No Fruitcake Jokes" T-shirt

Are you, dear friend, one of the chosen, the enlightenend, the few........who enjoys a good fruitcake, chock full of the freshest pecans and candied cherries and pineapple, bound only by ounces of deliciously spiced and perhaps liquored cake batter? Then bless you!

Or are you, poor soul, the one who spouts at the mention of fruitcake, “Makes a damn good doorstop”, or “I hope Aunt Ruth brings her fruitcake this year, ha-ha, we need another football!?” Then shame on you!

In 1975, when I opened my first bakery, at age 27, I will admit that I had my reservations about fruitcake. I was young, inexperienced, and although I’d been exposed to quality fruitcake baking, I had not yet “discovered” fruitcake. I may have even, at some time in my life, given in to “fruitcake bashing” myself, joining in with the legion of misguided individuals who smear fruitcake, the naive, the palateless.

Five minutes ago, here at 3:30 a.m., I turned by hand 100 pounds of beautiful cherries, pineapple, pecans, walnuts and blanched almonds into rum flavor and rum......to soak, and to be used later as the fruitcake topping. The sight of the fruit mixture and the aroma of the flavors are more than heavenly. I know my assistant, Mary, will arrive shortly and exclaim, in a kind of low, sensual tone.....”OHHHHHHHHH,...........Are we making fruitcake today!!!?

So what’sa matter? How did fruitcake acquire do many foes? Folks who are assured that most people in the group will agree with them as they wince and moan and gesture their fingers down their throats that fruitcake makes a better paperweight than food.....?

Years ago, when Aunt Ruth, and millions of others like her were shopping for their fruitcake ingredients, they found something new on the shelf. Something pretty, something inexpensive..........candied citrus peel!!!! “Wouldn’t that make a fine addition to my fruitcake?”, thought Ruth, “and so inexpensive!!” And so, on that day, millions of pretty, but pretty awful fruitcakes were born.

Marvelous little packages, those Currier and Ive embossed canned hostess gifts, masquerading as fruitcake. Those mountains of chain-store gift boxes for the purveyors of the fruitcake myth. The perfectly merchandised two pound cans of batter laced citron, ready to go for $2.99.

In our business, we sell hundreds of pounds of “real” fruitcake each holiday season. I would like to offer several suggestions if you intend on treating yourself to a fruitcake this year:

1. Try to find an independent baker, whose reputation depends on making “good things to eat”.
2. Be prepared to pay handsomely for a good fuitcake.
3. Chill it before slicing
4. Serve it ceremoniously, sliced thin, with a good quality coffee or tea.

Fruitcake, misunderstood and stripped of it’s former stature by greed and corporate merchandising, needs our help! Enjoy a good fruitcake. Invite some friends! And don’t forget to buy one for Aunt Ruth!

Single recipe (for 9x13 pan). Double recipe in cups and also weight appear to the right of each ingredient.

Directions:
Day 1- put all your fruit in a bowl. If any of it is larger pieces, cut it into 1/2”-3/4” size pieces. Pour rum over fruit, stir well and cover. Return to stir fruit in bowl 4-5 times in the next 20-24 hours. This serves to flavor and hydrate the fruit!)

3.Add the batter to the fruit and nut mixture and turn until well incorporated. Be gentle! I like to mixtape it by hand right on my kitchen counter.

4.Pack the finished batter/fruit/nuts mixture into your pan

5.Bake at 275 degrees (135 degrees C) about 2 hours 15 minutes. Remove from oven and let cool. Ovens vary so check your fruitcake out in maybe 2 hours, if it feels quite firm to the touch, it is probably done.

6. Remove from oven and allow to cool at least 2 hours before cutting. I like to cut it into pieces I can easily place into zip lock baggies or celophane bags

7.Cheesecloth and the booze. Some peeps like to wrap pieces of fruitcake in cheesecloth, and then drizzle or spray a little rum, bourbon or brandy onto their fruitcake each week for several (or many!) weeks until the holidays hit, for that extra punch! Keep your boozy fruitcakes in an air tight container to reduce evaporation. And arrange for a driver ;)

Notes: don’t be too crazy strict
with your ingredient selection. I mean aside from ruling out using any citron whatsoever. Maybe you get a good deal on candied pineapple but the papaya is crazy expensive. So go with a little more pineapple and skip the papaya! As long as your total fruit weight is correct it’s okay to modify your fruit selection some. After you have prepared your pieces of fruitcake to eat or use as gifts, I think it is wise to keep them refrigerated in an air tight container or baggie. Some candied and dried fruits are less stable


than others. So keep cold or frozen to retard spoilage! Mwah!! 😚