Wait 'til You See 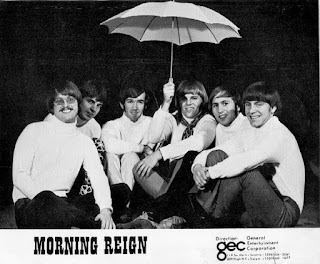 Sometime in 1968, my old band, the Morning Reign, traveled to LA to appear on the awesome TV show, "Happening 68", in a band contest, as I have mentioned before on this blog. Prior to hitting the road, we had successfully booked a few dates in LA, to keep us busy while we were on the road. We played a prom for Kasey Kasem, whose daughter was graduating from high school, and a couple other random dates. One evening we backed up The Box Tops, on a high school stage with other LA bands, and played to a throng of appreciative teeny boppers. Then we ran to our vehicle like the Beatles. It was awesome.

After the gig a couple of gentlemen, Mark Wildey, who had produced The Kingsmen, and Joey Paige, a recording artist and producer, approached us to record some of our songs ASAP, and we went into the studio the very next day in LA to lay down a few tunes, on their dime. Also awesome. After returning to Portland, we sent more original material to LA, including a song I had written and was especially high on titled "Wait 'til You See". We heard back shortly from them that, along with other songs they had chosen at publishing houses for us to record, they wanted us to record "Wait 'til You See". Completely awesome. A song of mine recorded in a pro studio with pro recording peeps!

It was a blast recording the song, there at "Nashville West Recording Studios", (where the Iron Butterfly had recorded IN-A-GADA-DA-VITA), in LA, in 1969, with my troops. The recording garnered some interest from RCA, and may have become a hit later for the Turtles, or The Morning Regin, but alas, close only counts in horseshoes and hand grenades. That incarnation of The Reign included Gene Heliker, Craig Chastain, Doug Heatherington, Bob Baker, Howard Holland, and me. The producers of this session also brought in a trombone player and an additional pianist.

A friend of mine, Chuck Stenberg, has recently been kind enough to transfer all the old Morning Reign lost tapes into mp3 files, now you're in trouble. Here is "Wait 'til You See". Of course the tapes had been lying in a closet for over 40 years, so the quality surely isn't what it was when first recorded. But I know you'll get the idea.

Click here to play the song "Wait 'til You See"

Excellent song. This should have been playing on all the stations then. Thank you for sharing.

I love this! First time I have heard it. Thanks for posting this Ric.

I still know the words but yet there are so many daily things I can't remember???

Haha I'm honored Donna, I cant even remember the words to my own songs!