A Certain Level of Luckiness

This is how it started. We had some serious health stuff go down in the fam in January, 2013, which resulted in my son Blaine spending a week in the hospital. Marie also came down with an as yet undiagnosed Shoulder Thang, and we await further analysis on that one, an MRI, other stuff. Sheesh. We look forward to better health!

When Blaine was in the hospital, and before the Shoulder Thang, Marie kept friends and family appraised of Blaine’s progress in the hospital via Facebook. At some point, in frustration, dealing with hospital staff and Blaine's illness, she posted the following, and received a few replies:

“That feeling when you suddenly realize it has required a certain level of madness to survive your own existence. Yeah, that's the one.”

To which I replied:

Ric Seaberg: See that's how I got you to marry me

About a second after I typed, “A certain level of luckiness” and rolled it
off my tongue, I knew there would be a song with this title. 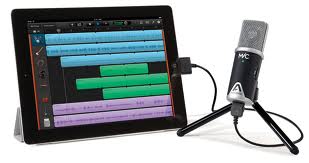 Okay so in the days prior to our january health issues,
I had discovered the microphone pictured here, which is a
special piece of electronics. Simply named the “Mic”, by Apoggee,
it is the first studio quality USB microphone that one can use to
record, get this, directly to an iPhone!! When I saw this, for me, it
was absolutely one of my famous, “where do I click?” moments!
Worry about how to pay for it later. I recently received it, and it is
awesome. And I’m thinking, OMG I am going to record a song directly onto the iPhone!

Okay back to the song. So I write the song titled  “A Certain Level
of Luckiness”, and I make it a love song to my pluperfect wife
Marie. And of course I am certainly inspired that the title came
from an actual spontaneous Facebook exchange between Marie
and I. Also awesome. 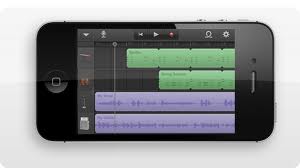 So I buy the Garageband app for iPhone, watch every YouTube
video I can find about Garageband for iPhone and iPad, and
basically teach myself the software. Learning music software is
always a challenge, especially when you have a song on the tip of
your tongue, and in your heart, and you can't wait to record it, but
you’ve go to learn all this shit first.

I started by opening Garageband for iPhone, and then doing the
set up for a new song, cinchy. Then I chose a tempo, and put
together a little drum track, using a classic drum kit, some congas,
and a tambourine. Then I played two tracks of accoustic guitar,
haha, me! Then I sang what we call a scratch vocal, a first vocal
take, just so, as you record the other instruments, you have a feel
for what the singer is doing. Then I took about a week, off and on,
to fool around with all the amazing instrumental options that are
available in garage band, and ended up adding grand piano, and
pizzicato strings. Garageband makes the playing of these cool
parts pretty easy. I mean, I didn’t have to learn how to play violin!
What fun!! 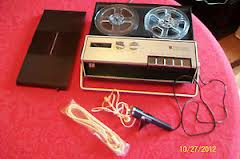 The recording tools that are available these days for musicians and songwriters at a reasonable price are mind boggling. Back in the day, when I was starting to become serious about songwriting, I had a little Penncrest (JC Penney) reel to reel tape recorder, like the one pictured here, which was basically complete shit sonically and super hard to use, don’t even make me think about it. I still have a couple of tapes from those days, when, for example, I would set it up in the passenger seat of the band truck traveling from Eugene to Pochatello, and track a song idea or two as we passed through Bend and Ontario, while Cac drove, and maybe added a harmony, as other band members packed zees in the back of the truck. Fond memories, but man, what an ordeal. There was really no way to capture a decent sound then, unless you went into a recording studio, and even there, maybe a studio would have a 4 track machine. Which was still a bear to use, merging (bouncing) tracks at the cost of fidelity to get a few more tracks, and having crappy control of your project.

Ok so here’s what you will spend to get the quality of sound you will hear on my project. IPhone, $399. (Which I’ve heard is good for other stuff) Apoggee “MIC”, $289. Garageband for iPhone, $4.99. A good pair of headphones or earbuds, $150. Total, around $950. For making a decent demo with exceptional fidelity, of an original song, at home, (or anywhere, it’s tiny!) by yourself, just amazing. And especially amazing for those of us who have dragged ourselves through many years of inadequate and expensive recording technology.

I used all 8 tracks available in garageband for iPhone to record this tune, plus I merged the two accoustic guitar parts so I could get one more track to do the ad libs in the outro, (which of course I relentlessly rehearsed). In sum, I’m pretty sure it took me about 20 hours. I hope you enjoy “A Certain Level of Luckiness”!

Oh, and honey, I Love You! Happy Valentine's Day!