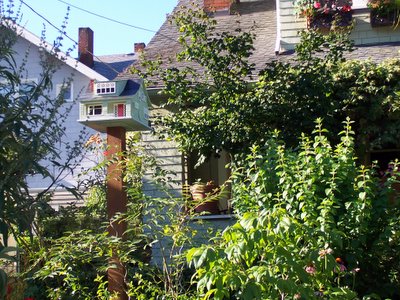 I guess it was a couple of years ago, when Marie and I were watching, yet again, a gardening show on HGTV, called “Curb Appeal”. At the end of the show, as the host was revealing the final appointments on the improved home’s “streetside”, we couldn’t help but be impressed with a large birdhouse she had installed, which had been built to match the main house, almost exactly. We oohed and ahhed a bit, but basically just sat there with our mint juleps, and didn’t budge.

About a year later, we found ourselves watching the same show again, same episode. Old people, like us, sometimes forget when they have seen a show before, and just go ahead and watch it again, as if it were new to them. Well, or so it seems.

Ric: We’ve seen this before.
Marie: We have? I don’t remember it.
Ric: I think it might be the one with the birdhouse.
Marie: What birdhouse?
Ric: You know, the birdhouse at the end of the show, the one that looks just like the house.
Marie: I dunno, maybe I fell asleep.
Ric: Nooooo, you saw it honey, we talked about it, you remember.......
Marie: What’s in that cup? Are you drinking too much coffee?

So we watched the show, and Marie did remember it finally, at the very end, when they showed the birdhouse. This time, when the credits rolled, we looked for the name of the designer. Later, I found the designer’s email address on the internet, and emailed her, requesting any information she could give me about the birdhouse, as in basically, where she got it. A couple of days later I received a reply, and a phone number.

After several calls and emails, and even snail mail, which included some actual pieces of our home’s roof, and color swatches of our actual house color, and front door color, sent to the artist, we received our Giant Bitchin Birdhouse in the mail. It was made by collectible birdhouses.com. My nephew Max and I installed it in our front yard, and I later put a light fixture on the post, which is timed to go on at dusk and off at dawn. It’s fun to see folks stop and take a look, and then realize it looks just like the big house behind it. Here are a couple more photos. If you ever wondered what our house looks like, this is it. One could imagine me, somewhere in the front room, just past the porch’s picture window, slumped down in my chair, suckin’ down some cold strong coffee, probably my wife’s leftovers from 8 a.m. 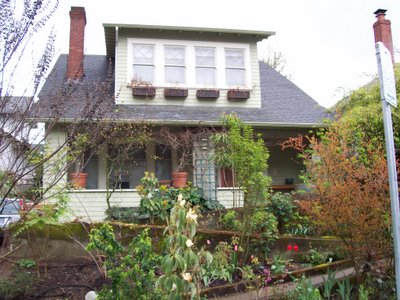 Here is our actual house, with concrete wheelchair ramp 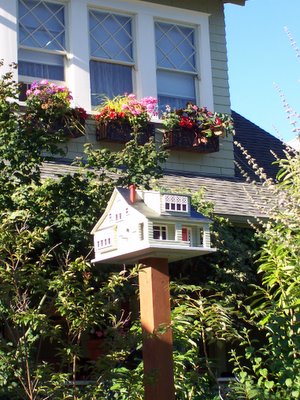 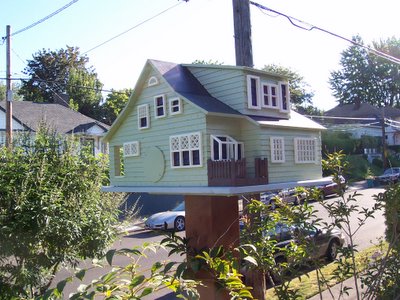 A rear view of the birdhouse, including our deck and kitchen bay window. Note the round "clean out" on the left.