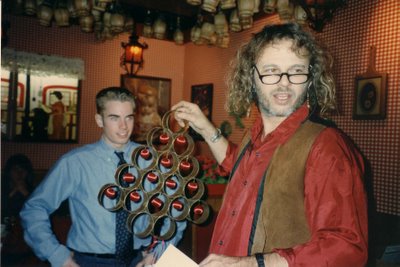 I proudly and readily admit that working at either of my two bakeries, first, Richard’s Bakery, in Tualatin Oregon, which I owned from 1975-1985, or at my second bakery, Favourites Bakery, in Portland, Oregon, from 1985-1995, for most of my employees, was a fun, if not wacky, working experience. The boss there, that would be me, tended to be sort of a cut up, not too strict, who loved to laugh. Who still loves to laugh.

The stories are endless, like the time I offered a free pastry to this painter guy who was a regular, if he would allow me to wrap his arm in a fruitcake fruit bag, the bag that lines a 30 lb. fruitcake fruit box, after we had removed the fruit. Lets just say, the insides of those bags are the stickiest, most icky surface ever. And to this guy’s credit, as we slid and slapped the horrible bag onto his arm, and giggled there before the pastry case, while other customer's eyes grew big with disgust and even horror, he played it to the hilt, saying how great it felt, how he would pay ME for such a treat, because he was not going to have to get his arms waxed for the holidays, that sort of thing. Loving to laugh as I do, it was totally worth the effort, however bizarre one might deem it to be. My employees, standing behind the counter, just went about their business, and plated up his free pastry, desensitized and undisturbed.

In about 1990, we decided to host a contest at Christmas time. We called it, “The Tacky Christmas Ornamentation Contest”, which challenged our regular customers and others to cull from their Christmas boxes, as they readied for the holidays, any odd and cheesy Christmas ornamentation they might find, and bring it to Favourites Bakery, to be displayed on a large table we had set up for such amazing artifacts. The response was spectacular, and before long our table, and other tables, were overflowing with the tackiest of Christmas Crafty Stuff, including, but not limited to, rotund Mr. and Mrs. Clauses, fashioned from Reader’s Digests, where you fold the pages just right, and add the facial features, etc, something, don’t quiz me on this. I am certain there are a billion of these things in people’s attics, since it likely came out as the Christmas cover story on Women’s Day in 1962. I am sorry to say that I cannot remember too many of the items, but if you want to know what those tables looked like, just go to the Goodwill or another major Thrift Store around Christmas, and you will find at least one aisle full of it. And it IS funny. I derive a great deal of pleasure from seeing these crazy crafty things that folks come up with, using egg cartons, milk cartons, syrofoam, broken pop bottle pieces, etc. Those of you out there who tend to adore the weird, might want to make it a destination, followed by a nice mug of piping hot mulled wine at home. And if you are with your spouse or significant other, be sure to pick up every other thing and feign undying admiration for the piece, oooohing and ahhhing, and suggesting your mantle as the perfect place to display such a treasure.

The judging of such a contest is so completely subjective, but since I owned the place, I eventually chose a spectacular item we dubbed “The Tuna Tree”, pictured above, which was fashioned by taking tuna cans, removing the tops and bottoms, ( of course you have to save tuna cans in a paper bag on your kitchen floor for months before you can make this decoration), spray painting all the cans, gluing them together in a tree shape, and then hanging little ornaments in the tuna cans using a bobby pin. Amazing! Gorgeous! A Yuletide Masterpiece!

I announced the winner at the Favourites Bakery Christmas Dinner, which was held at Portland’s “Sylvia’s Italian Restaurant” that year, but there was a special treat I had prepared to go with it. As I announced the winner, and pulled it from it’s hiding place, I had one of my staff hand out, as my employees ate pizza and drank beer, a sheet of paper upon which was written words which I had composed to the not so well known version of “Oh Christmas Tree”, titled “Oh Tuna Tree”, which goes like this:

Imagine, if you will, 25 or so partially inebriated bakery workers crooning this little tune, at the top of their lungs, in the middle of Sylvia’s Restaurant, before customers, as they swallowed their fettucini and bordeaux, and wait staff, whose jobs had suddenly become a bit more interesting. I think it’s safe to say, though, that one of our waitresses, an older woman who I recognized as a long-term employee from my many visits to Sylvia’s over the years, was alarmed. We took a few photos, finished our meals, paid our bill, and moved on to karaoke at the dive down the street.

Some years later, I turned my step-son Blaine onto the concept of Tacky Christmas Stuff, and he fell hard, hook, line, and plastic poinsettia. It wasn’t long before we found ourselves at The Goodwill, cruisin’ the bins. That year, we found among other excellent crafted ornamentation, and I swear this actually happened, a real piece of toast, from a real loaf of bread, that had been made into a Christmas tree ornament, all glittered and pipe cleanered, and then, had somehow survived through The Olsen’s Christmas Box, and the Goodwill Christmas Stuff aisle, to find it’s way into Blaine’s winter gloved hand, which he held up for my approval saying excitedly.....”OOOOOOOh Ric, check this out!!!!”

When Marie arrived home from work that day, I think she almost cried, when she saw that Blaine and I had already created a lovely display of the ornamentation we had purchased, at various Thrift Stores throughout the City of Portland, on our foyer table, so that when any holiday visitors entered, they would marvel at our awesome finds. I was taken aback, though, when Marie just stood there, frozen, staring at the table, with sort a of forlorn look on her face, as though she had just fallen victim to some of the craziest shit she’d ever seen, committed, sadly, by her lover and dear son. However, I don’t think she’d seen the toast yet.