I Love To Vomit 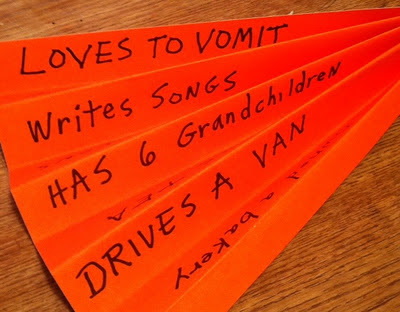 Every summer, for the last few years, my daughters Stacey and Amy have kindly allowed us to host our 3 grand daughters, Caitlyn, Caledonia, and Ellery, for several fun filled and Disney channeled days. Here they are, pictured with Marie, who anticipates their arrival all year long, dreaming up crafty and messy stuff to to, which leaves 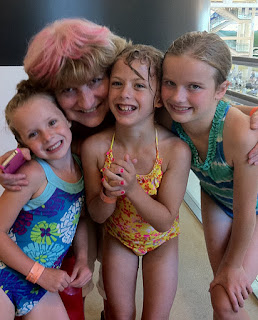 us with wonderful memories and, occasionally, a paint spattered deck table. Last summer, we also visited the new Wings and Waves water park in McMinnville, Oregon, which features an actual Boeing 747 sitting atop the structure. It was a blast. 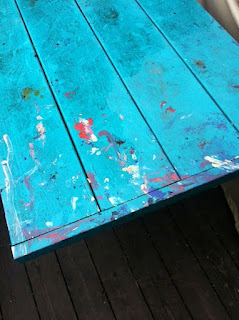 Time can move a bit slowly sometimes for the young ones, I mean, with all that
energy and free time, but we keep them busy. Well, ok, with a nod to Hannah Montana.

This past summer, on, oh, maybe the second day of their visit, Caitlyn, (pictured on the right) my daughter Stacey's youngest child, got all crafty. At some point during the day, as I sat in my easy chair, dozing off on some kiddy sit com, Cate handed each of us a fan she had made, pretty much like the one I've recreated above, and instructed us to write something about ourselves on each fold of the fan. Then, I guess, you read them out loud and maybe learn something about a person, or even, heh, get a laugh.

I wrote down a few things right away with my Sharpie, drives a van, owned a bakery, some other stuff, but when I got to the last fold, that mischievous part of grandpa came out, as I scrawled, knowing fully it'd be well noticed, "Loves To Vomit". I had almost forgotten about it when, a couple hours later, Catey held it up in my face, and with a look that said, "grandpa, you've finally lost it", announced loudly to the room, all giggly, "Grandpa loves to vomit!!" Of course, turning over this kind of info to three little girls aged 6-9 is going to get you some hoots, and basically, non-stop attention for 48 hours or so. Bingo!!

Some weeks later, oh Lord, say it isn't so, I heard a little chorus come down, and punched it into my iPhone, just for safe keeping, and then, as I walked the dogs, said to myself, "Nope, not gonna happen. There cannot be a song in this world written by me that is titled I Love To Vomit. I mean, surely this is something that even Ric Seaberg cannot abide".

But that dang little chorus kept coming in, and I had to admit, when I sang it, I laughed, and thought about how others (well, Cate, Calla and Ellery!!) might laugh too, having been there when the original I Love To Vomit caper went down, there in the TV room at Grandpa Ric's and Grandma Marie's crib.

So well, now the song is complete, having been written, recorded, and sung by me. My buddy Tim Ellis, my loyal and adequately nutty guitarist, is just the greatest for joining me in my, shall we say, less than mainstream numbers, and as you'll hear, once again, nails this sucker.

The process of writing a song, and going down the path of crafting the song so that it says what you want it to say, and sounds good, as you add instrumentation and vocals along the way, is just the bomb, for me anyway, and is a thread that has been running through my life since I was 13 years old. You get the basics recorded, drums, bass, a scratch lead vocal, and then the surprises start to happen. "Oh my God that falsetto harmony part on the chorus is perfect! Tim, that signature part you put in the second verse, I love it! Lets put it in all the verses!'. That kinda thing.

But something especially awesome happened this time, as the process of recording "I Love to Vomit" continued. One evening, after Tim had played his parts, I sat Marie down to listen to the song for the first time. I explained to her how, well, I knew it was really weird, and that I knew I was surely out of my ever lovin' gourd, I mean, to write and actually record such a song, and I admit, she pretty much had a look of agreement on her grille.

Near the end of the song, there appears a rap section, where the singer makes an even stronger case, admonishing the listener to do all things that might lead one to enjoy the finer pleasures of hurling. After I played Marie the song, and she had a better idea of where I was going with it, she said, "Okay honey, firstly, i know you very well, and I can attest to the fact that of all the people I have ever met, you are the person who hates to vomit most. Secondly, you have definitely and completely lost it, you are mad, I married a crazy person, you have catapulted yourself completely and utterly off the deep end this time and.....I'll do the rap."

Marie loves rap, and I sometimes hear the lilting sounds of Eminem or some other rap god blaring out of her home office as she answers email or writes tracts of her own. Or I will be sitting in the kitchen, and the bass line of one of her many rap selections will rattle the fire extinguisher which hangs on the kitchen wall, as I sit, wide eyed, crunching down an asian pear. So I knew it was a natural. And it took about one second for me to say, YESSSSS, you do the rap, PLEASE do the rap!!!!!!!!

I thought she might need a little extra inspiration, I mean as we each contemplated her impending rap performance, so I went online and bought her some gear, which she can be seen modeling here. Ah, Marie. My pluperfect spousal enigma. One minute, worried to death over whether or not the birds in our backyard greenway are getting enough to eat as we enter winter. The next minute, thrown' down some sorta gang signs on her husband's blog. On the street, they call her Marie D. Chill a.k.a. Luscious Money. Here's an interview with Luscious.

It's Christmas week, 2011. I am going to say right here and now that this song is not a Christmas present to my grand daughters. But we love them so much, and they do all figure into the creation of this wacky thing, so I hereby dedicate the song to them. Cate, Calla, and Ellery, you rock. And well........ so do we. I mean me, and Luscious Money.


Click here to listen to "I Love To Vomit"